All things asdf (and anything else)

The place for Roleplays

Ok, this is my first RP ever, but I think I can handle this, haha. Anyways, here's what's going on;
You are some sort of mutant/entity/alien or anything supernatural or out of the ordinary, and you've been captured and held in the secret research facility known as Area 51. For your character, you must give their name, a description of their physical traits (ie: appearance, fitness, etc) mental traits (intellect, personality), their powers, and a backstory.
Now, you wake up in your containment to noise outside, and the sounds of gun shots. In the confusion, an explosion creates an opening in your cell. This is where you start.

Phys. Traits: Very strong and fast (strength level is at about peak human condition) Has dark grey skin, short, thick black hair, (no facial hair) and a purple tint to his eyes. Is around 6'3". Has the body of a young adult

Mental Traits: very intelligent. Slightly evil, is what I would consider an anti-hero. Unpredictable

Backstory: an interdimensional alien, Ornias was born in the dimension of Saturn (named after the planet that the portal is located on). In a top secret endeavor for his world, Ornias was sent through the portal to explore. However, the extreme gasses on Saturn affected Ornias, greatly injured him, and nearly killed him, until a human ship testing experimental slipspace travel found him. They retreaved him and brought him back to earth, and began to put him through horrible experiments. The pain in one of the experiments awoke the power Ornias had acquired at the planet Saturn, and all of the doctors were incinerated instantly. He was restrained into a high security cell that was especially modified for his newfound powers.
Last edited by toast_ghost on Wed May 21, 2014 2:39 am, edited 3 times in total.
Top

Ornias blasts another barrage of heat rays at the security firing at him, while he blows out another containment center's door, releasing a new prisoner. As Ornias plows through the hall full of security using a shield of heat, disintegrating any bullets being fired at him, he begins to think about the chances of him taking on the whole base alone.
Top

Name: Yurad Deivenski
Phys. Traits: 5'4, small but strong, has red hair that needs to be cut, no facial hair, almost peak human condition,
Mental Traits: Mostly a shock-n-awe thinker, shoot first, ask questions later attitude,
Powers: Able to summon lightning, fire, water, and is somewhat a Necromancer. (sucks life from humans)
Backstory: Was on Mars with a landing party mining for a very precious metal only found there. The Mars Rover caught site, alerting NASA. They took care of him silently, killing the rest of his mining party and leaving him for observation. Plans to jack a stolen space ship in Area 51 and get back to his home, the Dark Side of the Moon (he lives underground)
Top

Yurad follows close behind the heat summoner, looking at the guards. They seemed to have an unlimited supply of bullets, Yurad stepped forth, summoning a lightning whip. Something he had been getting better and better at over the years. He lashed it across, electrocuting the line of guards and scorching their no dead bodies. "We should really get going..." Yurad said, summoning fireballs to take care of the wave of guards no rushing towards them.
Top

"Agreed. I have a plan. This hall leads to a heavily secured door that opens into the main base. The door is guarded by tons, especially now that they know we're loose, so we can count on a large resistance. Not to mention the door itself, which is pretty thick. But there's no worry, I'm sure we can get through." Ornias paused, "The only hard part is getting out of here. I guess our only option is taking one of their vehicles. Do you know how to operate one?"
Just then, a massive reinforcement arrives, apparently hellbent on containing the subjects.
Top

"Yeah, I think I can operate a few pedals and gears, after all, I DID operate a light-speed cruiser..." He said, whipping up a nice 3 foot tall 3 foot wide fire ball. He released it on the guards with hazmad suits, and they all were burned. The others fired a few rockets, but Yurad simply shot them out of the way, grabbing one of the guards, looking him straight into the eyes, and literally sucking out his life source. It gave him power. He threw the lifeless mesh doll-like thing on the ground, blasting air at 2,000 mph at the guards, just for good measure.
Top 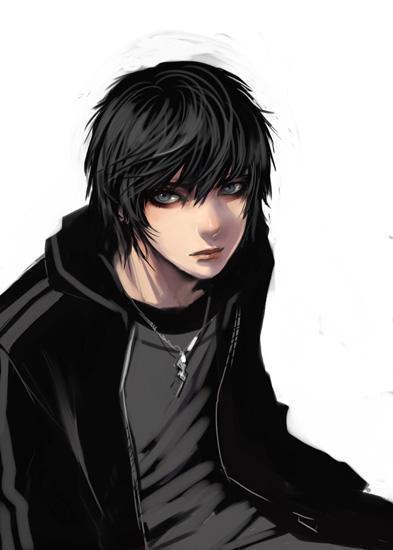 Personality: Trickster, thief, sly, sarcastic, and manipulative.
Powers: Can shift into the Shadow Realm - a plain of reality between worlds. (Basically he can turn into that shadow wolf above.)
Backstory: Fell out of transport circuit and ended up stranded. Lives on the Rings of Akhaten.
Top

Name: Len
Physical Traits: battered, bruised, 14-year old male. Silver eyes and brown hair, although he's never seen the light of day, as far as he can remember. 5'1". Very pale skin.
Mental Traits and personality: Doesn't trust anyone, and hasn't for 10 years. Slightly depressed, although sarcastic.
Powers: Telepathy, Telekinesis, Mind Reading, Mind Link (req. trust, and unused)
Backstory: Dropped off here at 1 month old. Has developed powers through time, but doesn't use them much in fear of the people who come in every few days and torture him. He hasn't had much freedom in his young life, and he's slowly giving up hope that he'll ever leave this hellhole. A few days ago, he heard plans to break out. He never was able to talk to them, or anyone for that matter. The others don't even know he's here.He learned that his powers can crush skulls, break diamond, and do much more, but he is nonviolent unless someone has severely wronged him. If he doesn't get out in this attempt, he may never get out. The scientists plan to use him as a force against the convicts who are escaping. Maybe he'll turn on his captors. Or maybe he'll kill the escapees.
I'm just going to post my first part right now.
Len was grabbed out of the cells. "The convicts are escaping! Help us!" The scientists yelled. He saw the convicts, and grabbed a table. Then, he catapulted a metal spear capable of killing at the convicts. He cringed in horror. Len didn't want to do this, but he knew he would be killed or worse the next day if the convicts escaped.
Top

Nakro sat in his little bubble, bouncing a rubber ball against the glass. Lights flashed outside his little container, but no noise reached him as he looked around. Eh, probably some hyped-up fire drill.... A blast suddenly shook the ground and he scrambled to stand. Ok... Maybe something a little more than practice...
Top

The two men were there. And so was another person. Len reached out to the other guy with pleading eyes. He knew they probably wouldn't help him, but he had to try. And then, he had to fire another round of bullets. He picked up a tabl and compacted it into a spear. He threw it and ran, his telekinesis propelling him down the wall. He was caught after a minute, and Len's face dropped. This was it for him. Unless... he could escape.
Top

The ground shook as stray bullets his power fuses and control cables. The lights above Nakro swung, casting shadows around the walls. Shadows. That was what he needed. With difficulty, he pushed himself to a sitting position and looked at the door.
Top

Len took a telekinetic hold on the nearest door. He just had to hold on for a while. Len didn't know how long he can last, and bullets began to fire. Len focused his energy on a shield to prevent him being moved, and overloaded the shield. That might last him a couple hours. He put all he had into it, and passed out.
Time left on shield: 8 hrs.
Top

Yurad dashed away from the running truck and ignored the shouts of his escapee. He ran to e main office, killing the guards and head warden. He put the intercom on, knowing it would attract more guards as to what he was about to say. "All escaped aliens, head to the vehicle bay. This is Yurad, trust me and you might actually end up out of this place. Yurad out."
Top

Len looked around. He was in the vehicle bay... with only 2 hrs left on his shield. Len powered it up again. +6 hrs.
Top

(Someone get Nakro? He's in a glass bubble. Just turn the lights off or get him out. xD)
Top

Random weakened. He, with a final push, ripped off a door and used it as a barrage of spears. Inside, was a man with black hair and pale skin. "Hey. Who're you." Random said through telepathy.
Top

Nakro looked up. Ok, definitely not a drill. His voice sounded weak, but his dialect sounded almost human. "Mind turning off the lights?"
Top

Len nodded. That much he knew. He threw the spears at all available lights . The lights dimmed and Len thought he saw a werewolf. Must've been another vision.
Top

The boy smirked slightly. In a flash, he disappeared from the prison. Nakro spoke from behind the other escapee. "So, what's the plan?"
Top

Len shot out. "What the hell was that?" He bristled and ripped off a wall. "You're a mutant too? I thought I was the only one?" Len crumpled the metal door into darts. He began to sharpen them, whistling.
Top
Post Reply
25 posts